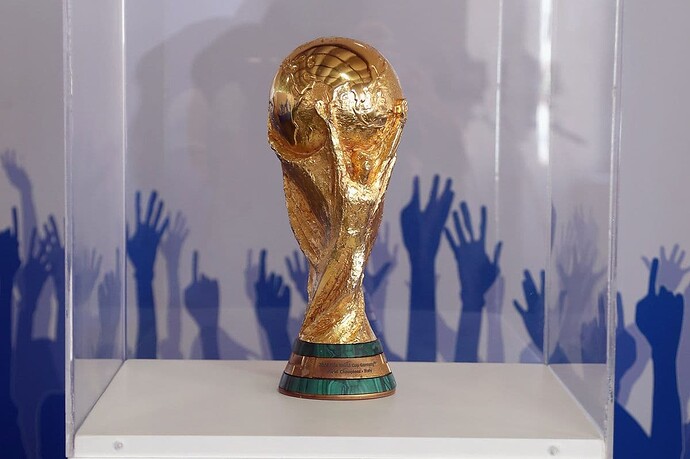 01. The World Cup is the biggest international soccer tournament in the world, and the most watched sporting event in the world. Thirty-two teams compete to be crowned World Cup winners every four years (though there has been talk of hosting the World Cup every other year by FIFA president Gianni Infantino).

02. The tournament will be played in Qatar, marking the first time it’s being hosted in the Middle East. Qatar beat out the United States, South Korea, Japan and Australia to win the bid in 2010, which was awarded by Sepp Blatter. We later discovered that two members of the FIFA Executive Committee had their voting rights suspended following allegations that they would accept money in exchange for votes.

03. This is the first World Cup to be played during our winter months, and that is to beat the heat of June and July that Qatar experiences and avoid the potential health risks of playing in such extreme heat.

05. To combat the heat, though it figures to be fairly comfortable during the tournament, the stadiums at the 2022 FIFA World Cup will have air conditioning.

06. It would be remiss to talk about the Qatar World Cup and ignore the number of controversies around the event. We’ve seen issues with migrant workers, slavery allegations and deaths. Amnesty International and other rights groups have called for $440 million to compensate migrant workers, matching the prize money of the winning team. Sticking with human rights, promoting same-sex relationships is illegal in Qatar which has caused several boycotts from LGBTQIA supporters. The tournament has been moved to the winter to accommodate the humid desert temperatures. We’ve seen bidding corruption allegations and ex-players such as Philipp Lahm boycott the whole thing.

07. For Americans, when traveling on a U.S. tourist passport, the government of Qatar does not require prior visa arrangements. Travelers may obtain a free visa waiver upon arrival, according to the State Department.

08. Drinking alcohol in public, as well as being drunk in public, is illegal in Qatar. You can face a six-month prison sentence or be fined as much as $850. Stadiums will not be selling alcohol during the matches, however, fan zones will be set up around the country allowing fans to have a drink in a designated area.

09. There have been 21 men’s World Cups, with Qatar being the 22nd World Cup. FIFA has been organizing World Cups since 1930. That’s when Uruguay hosted the first ever World Cup and beat Argentina in the final, 4-2. The United States finished third. It’s taken place every four years since 1930 aside from 1942 and 1946, which were canceled due to World War II.

11. Teams qualify by either hosting the tournament or completing a successful qualifying campaign in their confederation (region).

13. There are eight different venues for the tournament in five different host cities.

14. You can stream every single World Cup match live on fuboTV. The games will air on Fox and Telemundo.

15. The teams that qualified from the Concacaf region are the United States, Mexico, Canada and Costa Rica.

16. The participants from South America are Brazil, Argentina, Ecuador and Uruguay.

19. The African participants are Cameroon, Ghana, Morocco, Senegal and Tunisia.

20. Australia, Iran, Japan, Qatar, Saudi Arabia and South Korea are the teams from the Asian Football Confederation that will participate.

21. Four years after hosting, the Russians became ineligible following the invasion of Ukraine. They were barred from FIFA competitions, while clubs of the country were also booted from UEFA tournaments.

22. While there will be NFL on Thanksgiving, including the Buffalo Bills at Detroit Lions at 12:30 p.m. ET, there will also be four World Cup matches that day for the very first time. The slate included Cristiano Ronaldo’s Portugal taking on Ghana, Uruguay facing South Korea, and tournament favorites Brazil facing Serbia.

23. Similarly to Turkey Day, Black Friday consumers from all over the world will get their World Cup fix with a quadruple-header of games that ends with England taking on Gregg Berhalter’s United States.

26. The official song of the 2022 World Cup is “Hayya Hayya,” which means “Better Together,” performed by Trinidad Cardona, Davido and Aisha.

27. Video Assistant Referee will be used at the 2022 World Cup after being used in 2018. Among the incidents it will be used for are dangerous challenges, penalty kick decisions and
offsides.

28. Stephanie Frappart from France, Rwandan Salima Mukansanga and Yoshimi Yamashita from Japan became the first female referees to be appointed to a men’s World Cup.

29. A new support tool for video match officials and on-field officials will be used at the World Cup. The system helps them make faster, more accurate decisions when it comes to offside. The new system uses 12 dedicated tracking cameras underneath the roof of the stadium to track the ball and up to 29 data points for players to calculate their exact position. The ball will also have a sensor for measurement.

30. The biggest team missing is Italy. They have shockingly failed to qualify for the last two World Cups. They were upset by North Macedonia at home in March and will once again be spectators.

31. This will be the United States men’s national team’s first participation at the tournament since the 2014 edition, having failed to qualify for the 2018 edition. The U.S. finished qualifying in third place with a 7-4-3 record, three points behind both Canada and Mexico.

32. France won the 2018 tournament in Russia, defeating Croatia in the final. It was their second ever World Cup title, and they are once again reloaded and viewed as contenders to take home the crown. If they manage to win again, they will be the first back-to-back champs since Brazil in 1962.

33. Qatar open the tournament on Nov. 20 versus Ecuador, and what a match that will be. Both teams know that in a group with Senegal and the Netherlands, this one is so crucial in the battle of head to head. Expect an open game between two teams with technique and speed.

34. Argentina’s Messi is now 35, Portugal’s Ronaldo is now 37, and it’s realistic to think that this will be the last World Cup for both. Though it wouldn’t be all that shocking to see them in 2026 due to it being the biggest World Cup ever with expansion to 48 teams, in terms of a competitive standpoint, this will likely be their last in terms of top form.

35. The Qatar national team will be playing in the tournament for the very first time. They are the reigning AFC Asian Cup winners, they played at the 2019 Copa America and the 2021 Gold Cup (reaching the semifinals), but this is their first ever World Cup, having qualified as hosts.

37. There will be 64 official matches at the tournament.

38. The stadiums are within a 35-mile radius from Doha, the capital of Qatar.

39. The United States is about 849 times bigger than Qatar. The U.S. state of Connecticut is the closest comparison to the size of Qatar, and even then Connecticut is 8% larger than the host nation and with a higher population (1.1 million more people live in Connecticut).

40. The Brazil national team is the only country to have qualified for every single World Cup.

42. Both Iran and Morocco axed their managers ahead of the World Cup. Iran ended up bringing back Dragan Skoviv four days after firing him while Vahid Halilhodzic is out with Walid Regragui in as Morocco boss.

43. 16 teams advance from the group stage to form the round of 16, and from there it is single elimination the rest of the way.

45. The group stages will conclude on Dec. 2 at the conclusion of Serbia vs. Switzerland and Cameroon vs. Brazil in Group G.

47. Being the champion does not guarantee you a spot at the next World Cup.

48. The next World Cup after this one will be hosted in the United States, Mexico and Canada.

50. There is not a Women’s World Cup in 2022. The next one will be next year in Australia and New Zealand. The United States women’s national team booked their place over the summer by winning the Concacaf W Championship.