NOT TO MENTION I SAID WHAT THE HECK AND GAVE GO GO BINGO A TRY SINCE ITS THE FIRST TIME IVE EVER SEEN THE GAME OR HAVE IT RECOMMENDED TO ME AND IT COMPLETELY DRAINED ME.

Safe to say I won’t be playing table games unless it’s poker and even then I don’t particularly care for poker as I’m just not that good at it.

Anyone else get games recommended to them and have no clue as to why certain games are recommended when you’ve never played them? Or gave a new game that was recommended a try and actually won something?

Just confused I usually get games recommended to me that I play or similar to the games I play and I win some and lose some but the new table games that were recommended just wiped my balance I mean not one spin payed out more than the amount I wagered on that spin. It’s ridiculous.

Idk maybe had I won something then this post would be encouraging others to play the games recommended for them but I’m here to say stick with your favs and the ones you actually win something on don’t switch it up.
Best of luck to all 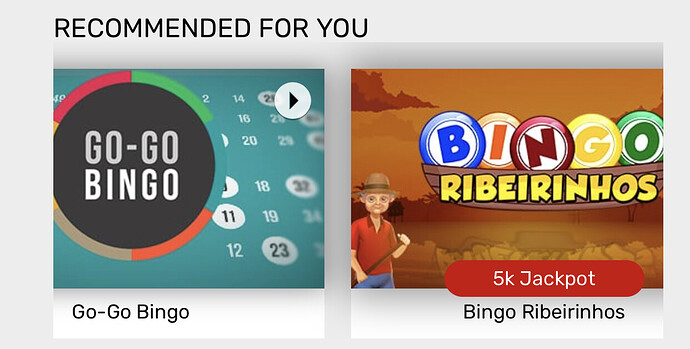 I think you might have answered your own question