Voided bets only for Me

Interesting how Bovada is more than happy to admit they made a line error when it benefits them to do so but when you’re placing a bet on a +1.5 in a tennis set that magically changes to -1.5 when the bet goes through the site tells you there’s “no way the line was an error”

Man how great would life be if every time you screwed up you could erase the negative outcomes for yourself but go ahead and keep the outcome when shit went in your favor??

Bovada has become much more scummy with line errors, but they literally sent messages to a plethora of others saying they’re honoring the very same bet I took…except I got a message saying no. Doesn’t make sense, I think it’s just a software malfunction but no one understands my argument apparently lol.

You can’t grade a wager for some people and not others if they took the same bet at the same time with the same odds…like what??

I’ll have the time stamps shortly to prove this…and I hope I’m compensated properly and fairly because I still have faith.

That’s not even really a mildly warm take

I appreciate it, and can only hope bovada sees it the same way.

I understand it’s a line error and that was the reasoning for the initial void; I know the risks. However, for them to unsettle all of the wagers meant they were going to honor them. only re-voiding mine 60 seconds before kickoff seems targeted. I know that’s not their intention, but when you’re the only one negatively affected by this when others are celebrating insane wins, it’s only natural.

Again i can provide time stamps for both my bets and other individuals who took this line; furthermore I can provide their reference numbers as they’ve been kind enough to help me out in this quest to rightfully get my money. It’ll show the same bet, the timestamp, and that their outcome was a win PLUS a message from bovada saying they’re honoring the bet. Instead, I have a void and a message saying line error…same bet, same time, and smaller winnings tbh.

Mods, please help. I’ll provide any info needed as previously stated; I’ll fight to the very end. I feel as if it’s a very straightforward argument!

Now, looking objectively, I think +650 for any defensive player to NOT get an Interception is an OBVIOUS line error, so I could easily see them voiding that wager as 110% of the people placing it knew it was in error, but I 100% think it should be graded the same across the board.

I’m sure the @moderators will weigh in here.

And look I completely agree it’s a bad line. If it was voided sitewide, it’s totally fair. However since It only affected me, I’m just kind of at a loss.

I’ve been down the past few weeks substantially so it just sucks that I seem to be the only one affected by this, and yet have all the proof that I did nothing different then anyone else who was rewarded from these bets. Just hope the mods hear me out and assist me more than the supervisors that kept saying everything was voided when I know for a fact it wasn’t. They already told others they’re honoring the bet.

These wagers would not have been considered “Genuine” as outlined HERE

*"The term ‘Genuine Wager’ applies to all bet types and sports lines including Live bets. Those wagers are deemed to have been placed in an attempt to NOT take advantage of a line error, and will be honored. *

Conversely, non-genuine wagers are defined as those which our Book Managers determine have been placed with the sole intention of purposefully and deliberately taking advantage of a line error.

As such, these wagers will be voided and risk amounts returned. Decisions in these cases will be enforced in accordance with clause 6.7 of the Bovada Terms of Service"

For accounts where our Book Managers determined the wagers were placed with the intention of purposefully and deliberately taking advantage of the line errors, those wagers have been voided.

So that seems completely arbitrary. I know someone who wagered more than me…how is that any different? Every single bet had the intention of taking advantage of +650 lol

Im going to SBR now that bovada won’t pay me out. I’ve tried to be reasonable but it’s the same bets placed at the same times with the same odds.

I can’t simplify this enough. I have literal photos to prove it. They just don’t want to pay me out. Unfortunate that they’ve dropped from an A rated book into something equivalent to mybookie

@James_Bovada one last thing so I’ll add this…how come the others received this message?

And I received this 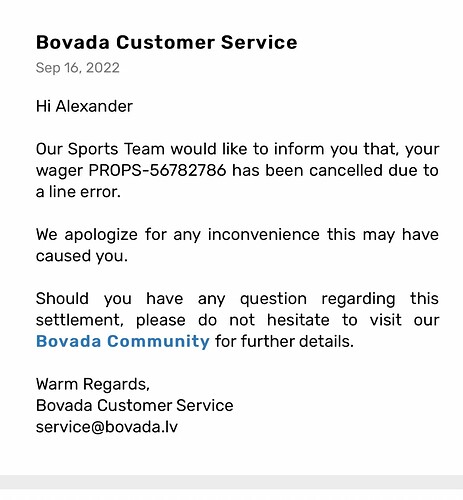 Make it make sense…I’ve got about 20 of these photos and counting for when I go to SBR with all of this.

Accounts are reviewed for activity and betting patterns - and when there are obvious deviations from those patterns. With that said, our book managers have the ability to make calls on a per-account basis.

It is possible that your friends who received that message made wagers on the lines that didn’t deviate from their regular betting patterns and they were given the benefit of the doubt.

You mentioned that you knew these were errors and wagered on them because of that, and your betting patterns would have shown that when your activity was reviewed.

This is comically generic. The people betting on prop builder have the exact same patterns. let me put it this way.

If 10 people bet on the Miami Heat ML but you only pay 9 of them because it “didn’t adhere to patterns”…excuse my language, but wtf?

So the others get off with the winnings, but you’re going to penalize me of all people? Your sports betting team already said they’re honoring others’ slips (which are undoubtedly the very same bets I made) because they value customer service. So why are my specific bets voids? I haven’t bet in months before starting again recently…and I’m definitely in the red the past few weeks. I’m calling bs sir, I’m sorry. This is absurdly wrong.

Help me out here

So i rarely bet props

Are you saying here that if i were to bet a prop and i won it would be up to the book to decide if i we’re to get paid on the W based on my historical betting patterns??

And, in essence, whether the bet won isn’t actually the determining factor in whether i get paid??

Obviously every person who bet on this bet being mentioned in the thread knew it was a line error. So the justification for payiing some peeps and not others is simply whether or not they usually bet props?? Do you not see how that is a pretty slippery slope??

What if a poker player decides to bet sports and hits a 4 teamer on their first try? Can the book say “well you don’t usually bet sports so you must have had inside info?” Etc etc

I would love to see how many people had that prop last night. I’m with you now @asgold either all get honored or none should be. And if you were way off your patterns, they should go to your pattern and break you off something in the pursuit of customer service. That’s crappy man. Meet him in the middle at least Bovada!!

Would have to be $$ figures… right??? If it’s what you’re saying i think we’d hear about that way more often. I never play slots, but if I sit down and spin three times and hit a jackpot, they don’t have to pay me???

I know of at least 4 people who got paid out, probably more if I confirm. They’ve all said they’ll provide reference numbers and screenshots on my behalf as well. It just seems so scummy.

I just think this is so wrong. They’re just not paying me because they feel like it.

Just curious, but seemed like you had multiple bets around this wager right? Did the other people only bet this prop once?
So James point would make sense if you made this bet multiple times, or if you had multiple parlays with this thing wrapped up in it to give your bets more of a push. That would be easy to tell against prior betting patterns. But not even betting patterns, you clearly show its a line error and tried to take advantage of it.

This definitely only applies to lines which are in error. I think you are going a little far on your poker player trying to bet sports.
Fully agree everyone knew they were getting a steal by making this bet. No one that bet on it didnt notice. Should have been voided completely. Makes past decisions around similar items/situations even worse to me.

I know others that maxed with no penalty. Makes no sense like you said - if it’s a void, void everyone. But now that they came out and honored the bets, it’s only fair mine are honored too