Congratulations to those who survived week 1!

449 players made it to week 2 and below is a reminder of the rules.

More specifics to our survivor pool:

Please let us know if you have any questions.

Do we have to remember who we picked every week or will there be a chart or something with our previous week’s picks?

We can provide a chart @baldandbankrupt. In regard to the issue, can you take a screenshot, please?

I picked one of these teams. As you can see, the circle is not bolded. 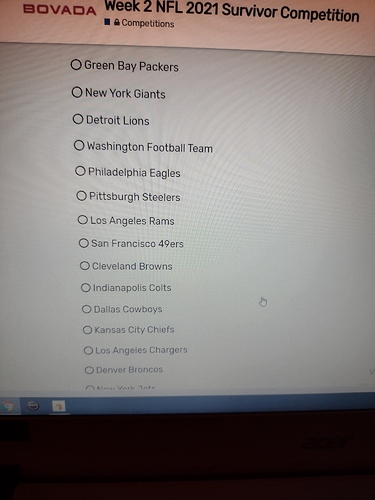 Ok it worked now, the circle is bolded. Thank you @James_Bovada

how do we know who we picked week 1, first survivor challenge i have ever played where you picks are not eliminated from list next week

Agree with the above, is there a way we can see who we have already picked so we don’t pick that team by accident again? Thanks

Hey guys we added the winners picks from week 1 here and will keep it updated.

Took the Brownies, next leg up is the girl scouts. Budman

I got bills this week, gonna bounce back after dumb losee

Its only been one week , write it down on a piece of paper or something .

eam each week. Choosing a team in any given week that you’ve already picked in a previous week will get you eliminated. (For example, if you’re still in by week 10, that means you should have chosen 10 different teams). So you have to plan accordingly.

Looks like we have to track our own picks week to week? Go Pats!

I am in in think my pick shows bold circle

Just keep track of your own picks. It’s been 1 week only